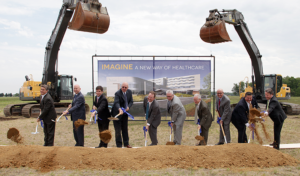 Bayhealth Medical Center is selling its Milford hospital as it continues construction on the facility that will replace it.

Terry Murphy, Bayhealth’s CEO, says the two companies will complement each other rather than butt heads in the fairly rural area.

“On our project, it’s an acute care hospital. We have a great acute rehab facility – skilled nursing would not be in the project – and so this actually works very well,” Murphy said.

Murphy notes the new space will help expand their cardiovascular unit, along with new child specialists.

“We are working with Nemours Children’s health system to bring pediatric specialists and subspecialists to this part of the state, for Kent and Sussex County,” he said.

Primary care doctors and the hospital’s cancer wing will also move to the new building.

Milford Memorial will continue to operate until the new campus is ready. The new hospital is expected to open January 2018.