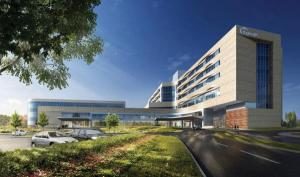 The Sussex County Council this week received an update on the Bayhealth Sussex Campus project now under construction outside of Milford.

Terry Murphy, president and CEO of Bayhealth, said the not-for-profit healthcare provider treats on average 17,000 patients admitted to their hospitals in any given year. On an average day, they treat 251 patients.

Murphy said they hope to be completed and moved in to the Sussex campus by January of 2019.

The project will use 50 acres of a 169-acre parcel, which Murphy said would allow them to grow for generations to come. The 30-bay emergency department will feature trauma and treatment bays, as well as behavioral health rooms. There will also be a 12-patient-bed clinical decision unit.

“We are expanding our number of operating rooms,” he added. “Again, the population is growing in Sussex County, as well as its aging, and with the obesity epidemic, the number of patients that present to us with multiple chronic conditions continues to increase. We’re also increasing cardiac procedural capabilities, as well radiology procedures for diagnostic testing.”

Murphy said the skin of the building is currently being put on and is visible to those traveling along Route 1.

Recruitment is also a focus, said Murphy, noting they are working closely with other providers in the area. Bayhealth is also a magnet designated by the American Nursing Association for Professional Nursing.

“We think that actually helps us attract the best and brightest.”

Murphy said they are pleased to have attracted Nemours DuPont to the southern part of the state. Approximately 3,500 square feet of office space on the campus will be dedicated to Nemours pediatric specialists, he said, noting it would not be a hospital facility.

Nationwide Healthcare Services will be purchasing the 22-acre Milford Memorial to create a “wellness community” with a skilled nursing facility, with capital investments of more than $20 million, creating more than 300 full-time jobs.

“We are extremely pleased to find Nationwide,” he said. “There is a need for skilled nursing beds in this part of the state. They fulfill a need.”

Murphy thanked the council for their time and support of the project.

“We are very pleased with the reinvestment into Sussex County,” he said. “We’re planning this for generations to come.”

“We’ve very, very happy for you and the whole of Sussex County,” said Council President Michael Vincent. “It’s going to be a great facility.”

Also at the July 25 meeting, the council discussed a draft ordinance to amend the County’s signage code.

Janelle Cornwell, director of Planning & Zoning, said her department has seen an issue with property owners wanting to place an on-premises sign on their property for a business but who are unable to do so because a neighboring property has a billboard within 50 feet.

“The intent of this ordinance is to amend that, to allow an on-premises sign to be located within 50 feet of that billboard; however, a billboard could not be erected within 50 feet of a sign,” she explained, adding that the Planning & Zoning Commission recommended the council approve the draft amendment.

Councilman Rob Arlett asked if the separation also required that the two signs be on separate parcels.

“The way it reads now, it doesn’t matter if it’s on the same parcel or an adjacent [parce],” said Assistant County Attorney Jamie Sharp.

Arlett asked whether or not the proposed amendment could be used to “circumvent the original intent of separation.”

Arlett said that, if a property owner who had a billboard erected on their property wanted to create a brick-and-mortar business, they would potentially have to remove their billboard, as the code currently reads.

“It’s quite possible that that’s something they would have to do,” said Cornwell.

“My concern is this is a potential loophole to circumvent the original intent,” said Arlett.

The council chose to approve the amendment with a 5-0 vote.

The council at the meeting also unanimously approved a new memorandum of understanding with the Delaware State Police, which provides a shared-cost approach to address staffing needs in Sussex County.

“Previous MOUs created the arrangement that the County Council would fund half of 44 troopers, up to the rank of trooper first-class. During this year’s budget process, the State requested that the County pay for the full personnel costs of 22 officers that range from trooper to lieutenant,” said County Finance Director Gina Jennings.

“The primary difference is the way the County Council funds the additional positions allocated to Sussex County,” she added.

Jennings said the County will still be allocated 187 DSP officers.

“The new allocation of cost has increased the County’s commitment by approximately $700,000.”

The council voted 5-0 to approve the MOU.